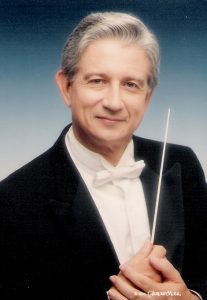 Clarinetist and Conductor Robert F. Wall is a native Texan.  His early music training was received in the public schools of Beaumont, Texas where he was inspired by the legend of Harry James, another Beaumont native to play beautiful music.  Mr. Wall received his Bachelor Degree in Music Performance from Lamar University in Beaumont, then attended the University of Idaho in Moscow, Idaho and was awarded his Master of Music in Performance.  After serving three years in the Fourth Army Band, he did post graduate work in Music at the University of Houston.  Mr. Wall has held the post of Principal Clarinet with the Clear Lake Symphony for 30 years and in 1993 was named Associate Conductor, where he conducts the Symphony during its annual Fall “Pops” and Christmas “Pops” concerts.

Mr. Wall has been active in music in the Galveston/Clear Lake area for many years.  In addition to his work with the Clear Lake Symphony, he served as soloist and Principal Clarinet for nine years with the Galveston Symphony under the direction of long time Houston Symphony Principal Clarinet, Richard Pickar.  He was also the Orchestra Conductor for the Galveston Civic Opera production of the Mikado.  Recently Mr. Wall performed with his jazz combo for the Crisis Pregnancy Center’s annual fundraiser and for the Clear Lake Symphony’s Music-In-Schools presentations in the CCISD elementary schools.

Mr. Wall was a music educator for many years and currently is in his 29th year as Instrumental Music Director and Orchestra Director at University Baptist Church in Clear Lake.  With several hundred music orchestrations as part of his duties at the church, he has also become an accomplished composer and orchestrator of small string and wind ensemble music which is published through Cimarron Music Press.  Mr. Wall’s article on clarinet and bass clarinet pedagogy is also published through LifeWay Christian Resources in their textbook, The Instrumental Resource.